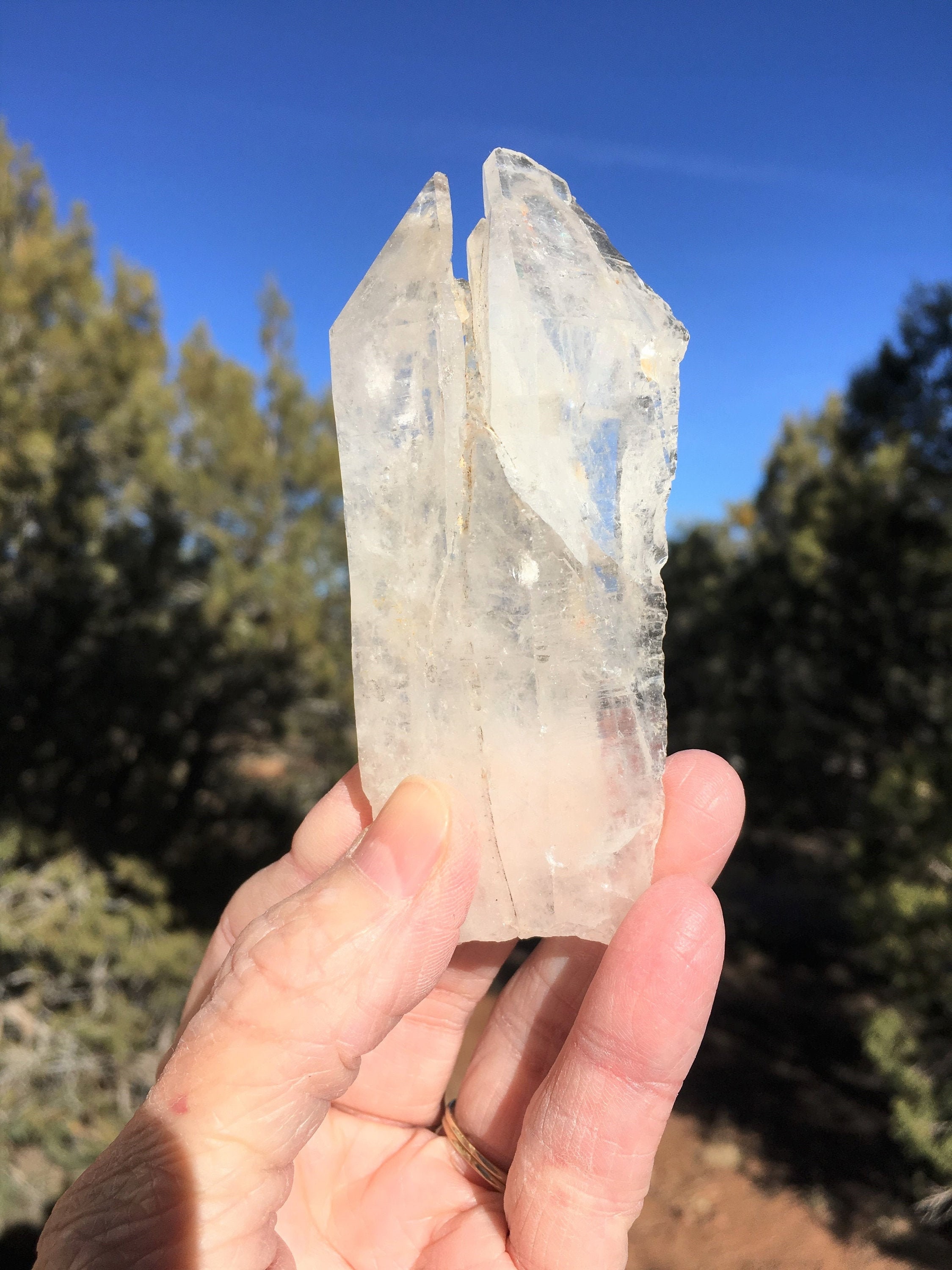 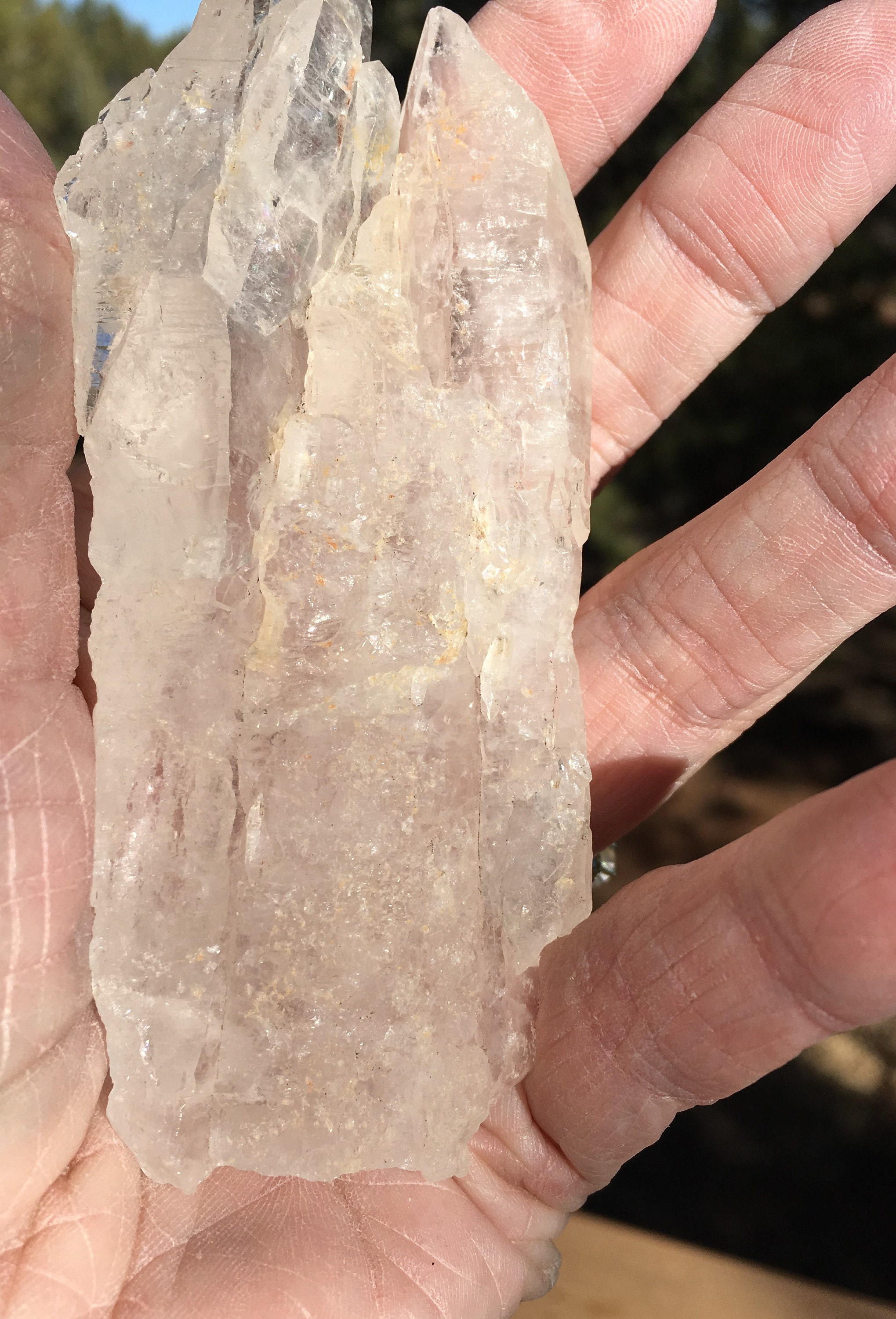 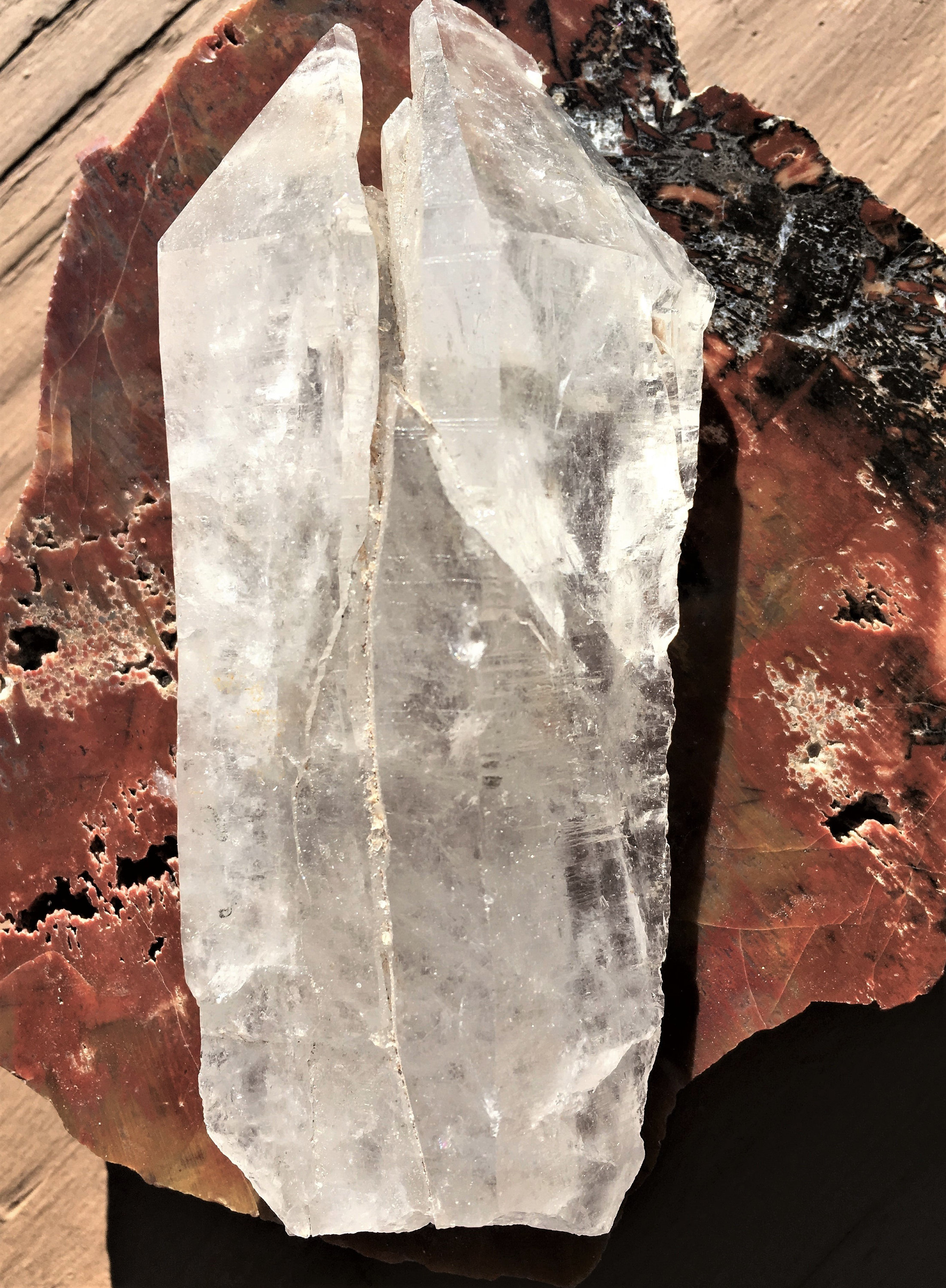 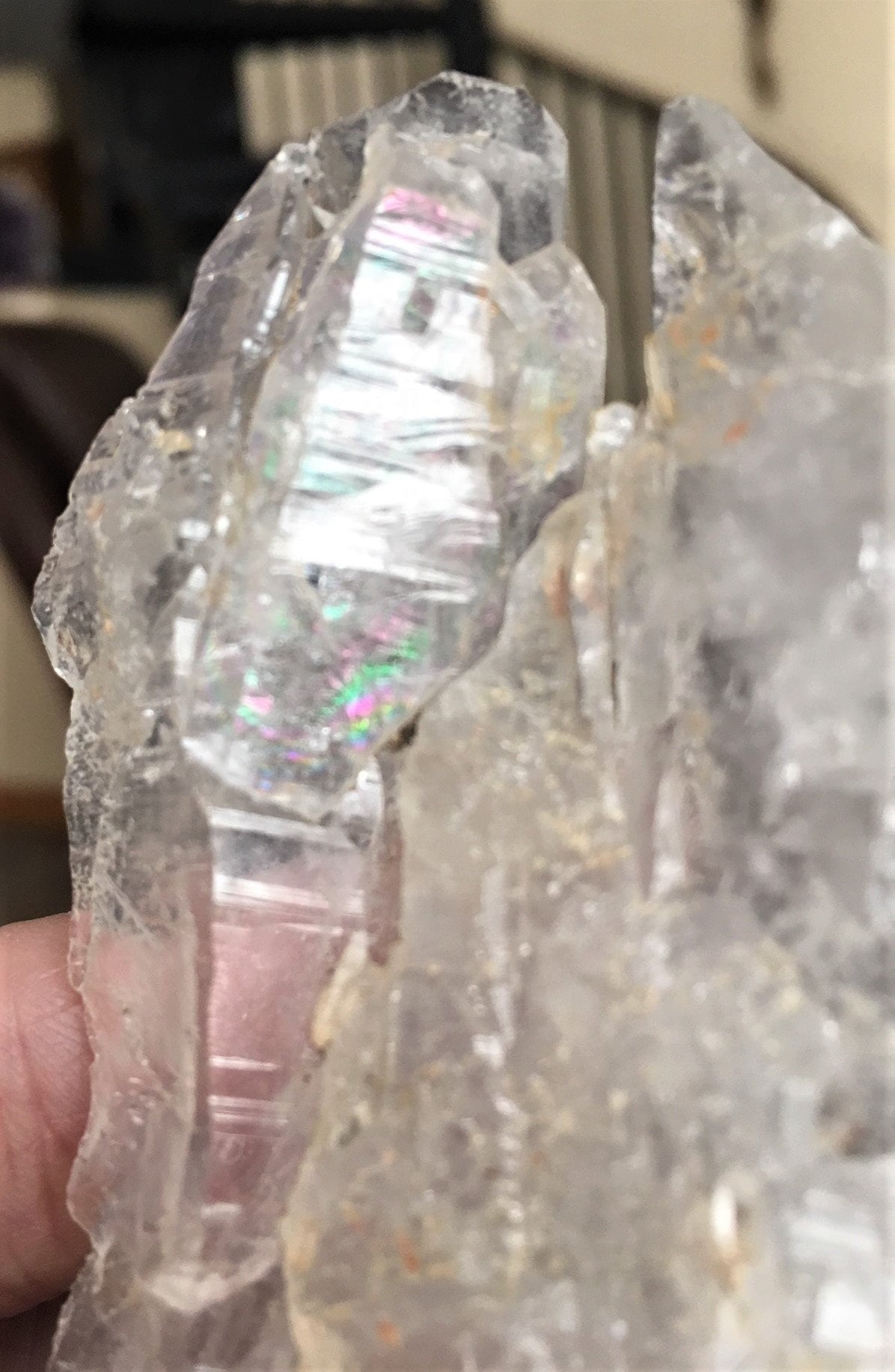 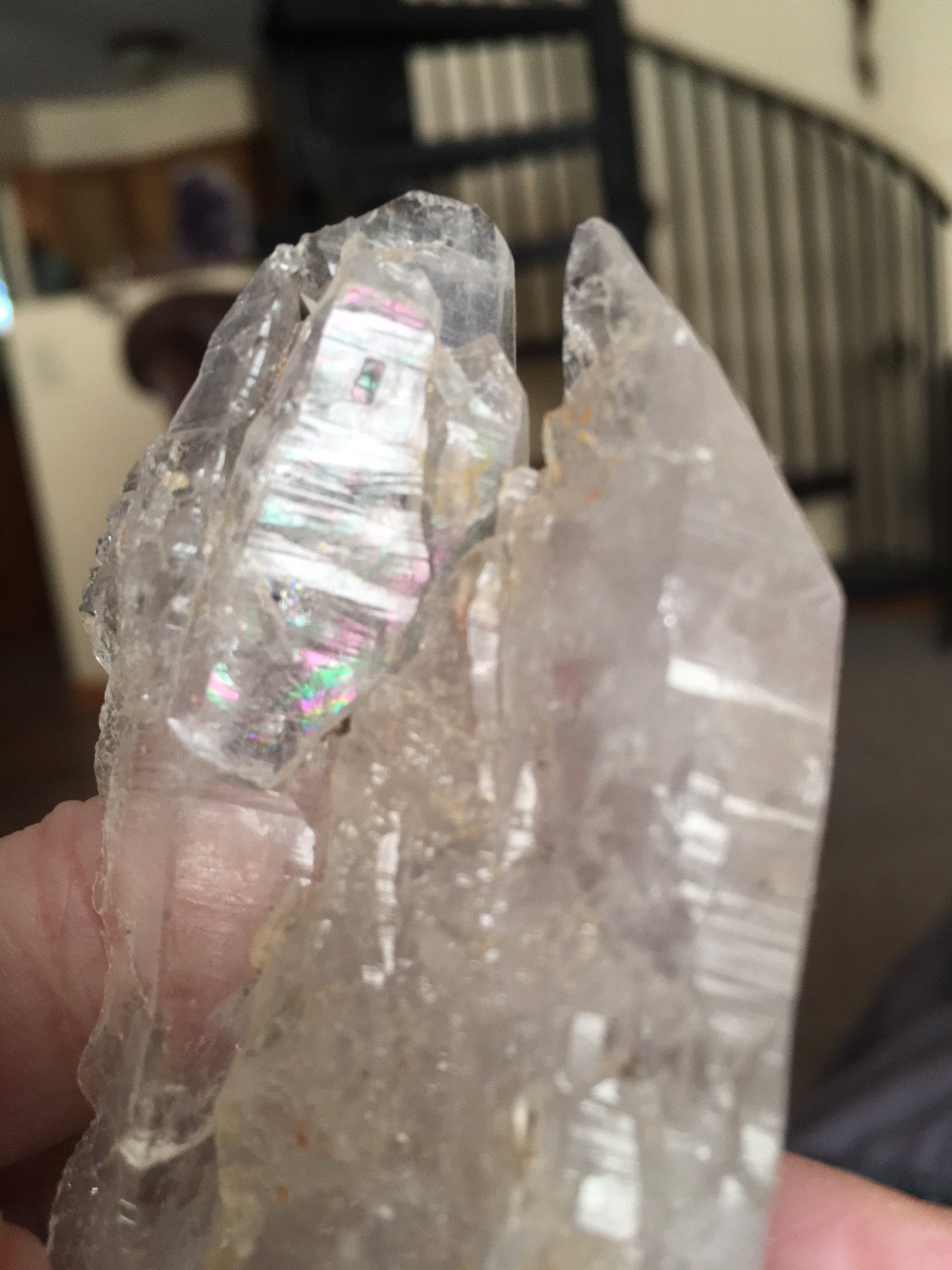 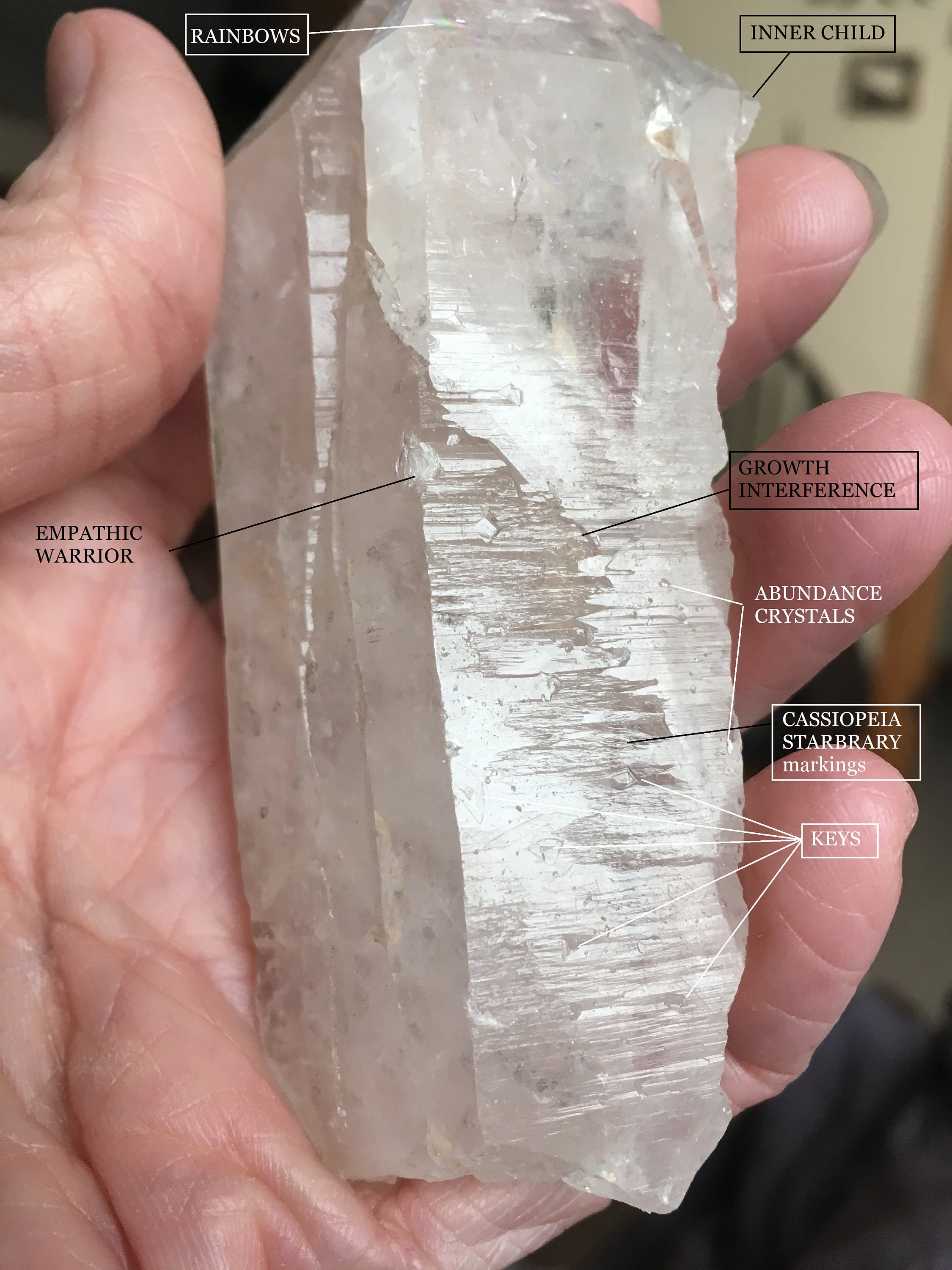 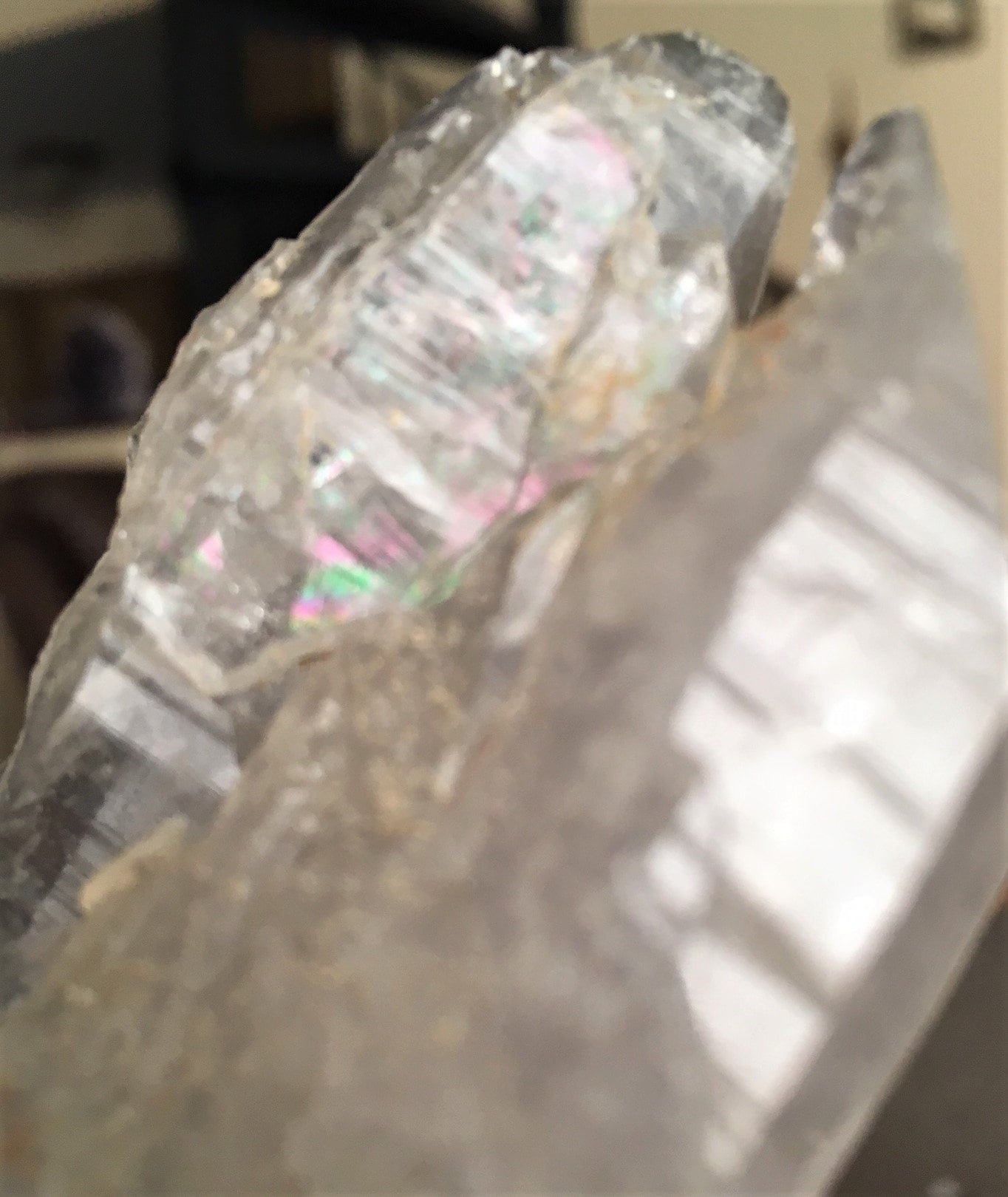 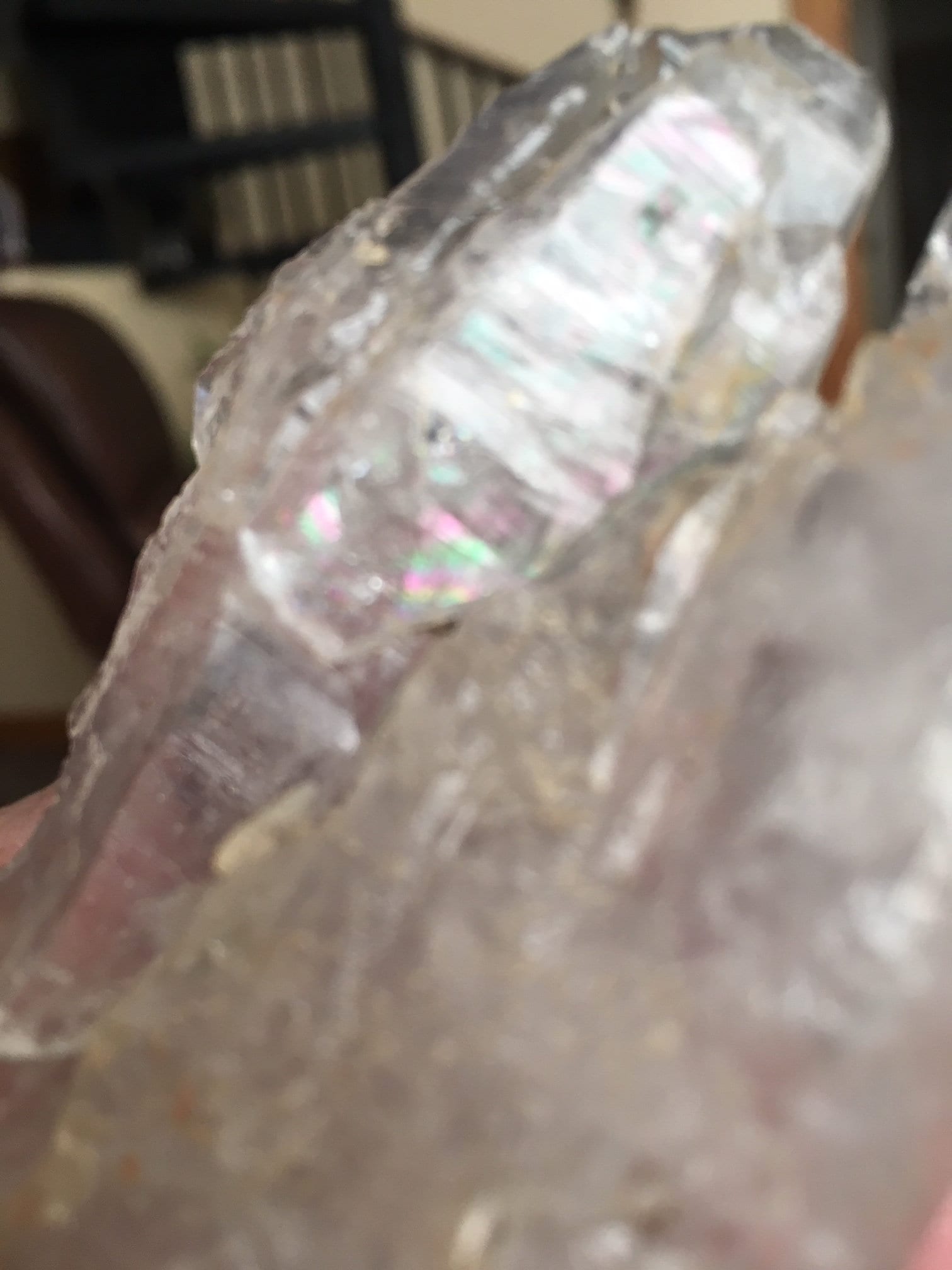 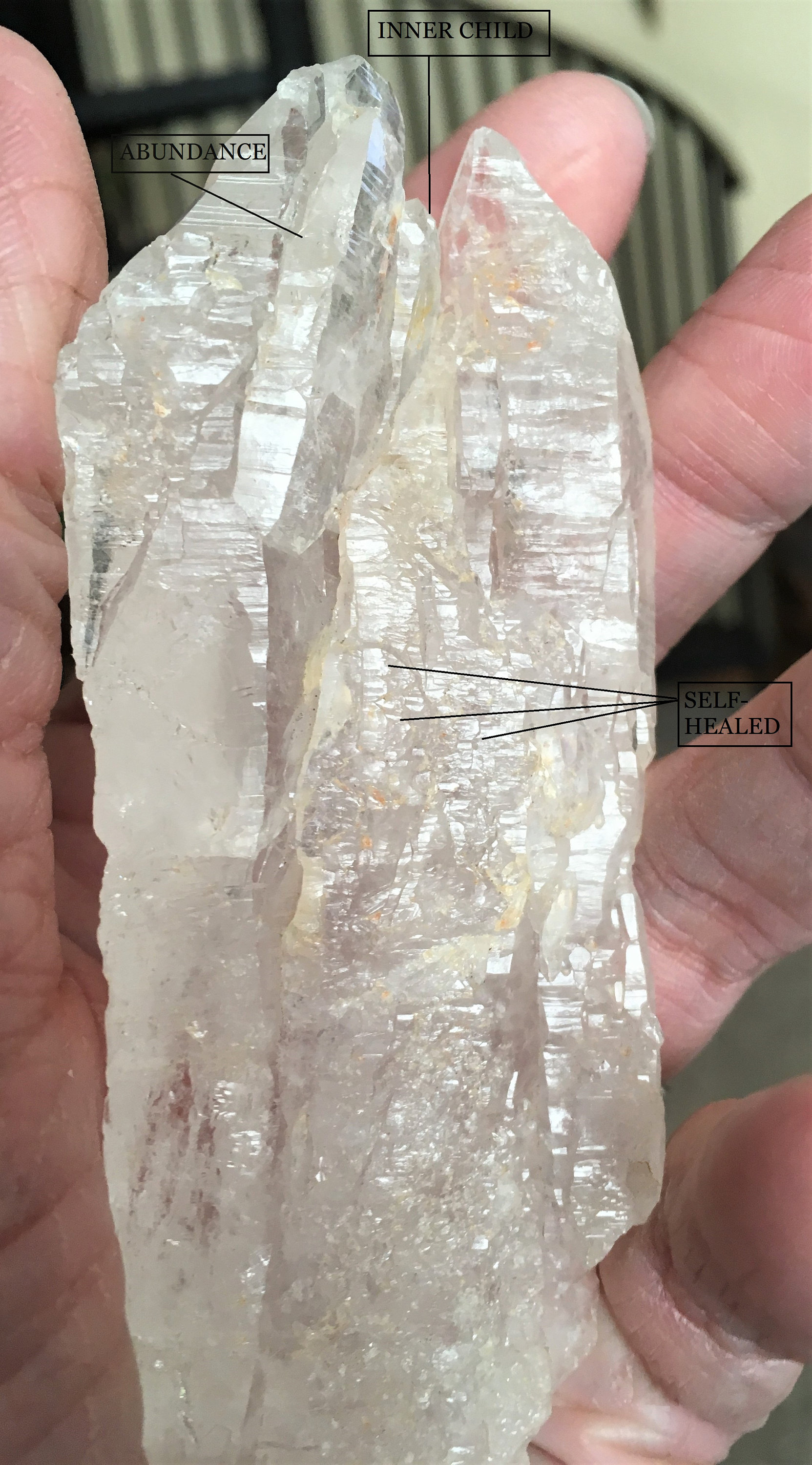 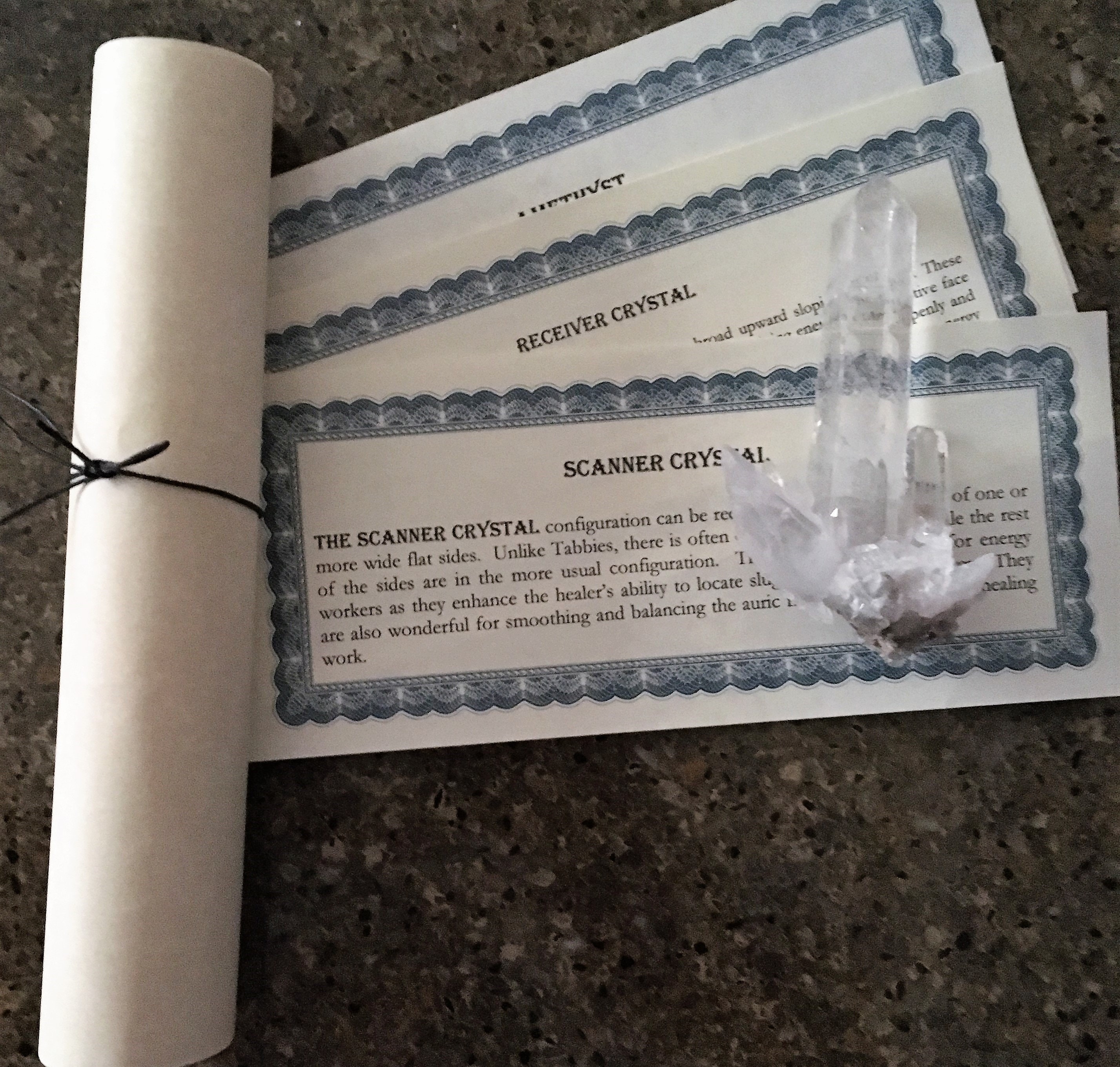 This is a VERY RARE CRYSTAL. It is a LEMURIAN, GROWTH INTERFERENCE, INNER CHILD, KEY, ABUNDANCE, EMPATHIC WARRIOR STARBRARY Crystal with a SELF-HEALED BOTTOM. A GROWTH INTERFERENCE CRYSTAL is quite unique. Just as it sounds, while it was growing the normal growth was interrupted by an unusual mineral deposit which caused an interference in the crystal. This particular crystal has a split face. It actually had a RECORD KEEPER in the gap that was cut in half. I have never seen another crystal like this one.

The energy of this crystal is for PERSONAL GROWTH, RIDDING YOURSELF OF ANY HINDRANCE TO YOUR HIGHER LEARNING and PROTECTION.

This Crystal has the unusual markings of a MASTER STARBRARY - ORION, PLEIADES, LEO and CASSIOPEIA.

The LEMURIAN HEALERS / LEMURIAN SEED CRYSTALS are commonly used by light workers, individuals who have chosen, or been chosen, to work on aiding the planet and humanity at this time. These crystals are recognized by the horizontal lines that etch their sides, and sometimes their faces, appear to be ancient “bar codes”, containing sacred information. According to the legends, if you are drawn to these crystals, they have something you need. During meditation, you run your finger or nail over the lines to accept the messages of awareness or insight from them. These Healers are especially helpful for personal healing for emotional issues.

GROWTH INTERFERENCE QUARTZ CRYSTALS are formed when another mineral comes in and lies on the crystal during its growth period. The mineral may dissolve away or remain, but they leave marks from the disruption in the crystals growth. These can manifest as a split top as shown above or simply leave jagged lines (like carvings) on the crystal. They assist with accessing Higher Realms. Their energy ASSISTS WITH REMOVING HINDRANCES that are STANDING IN THE WAY OF SPIRITUAL GROWTH AND PROGRESS. They PROMOTE THE REMOVAL OF ENERGY BLOCKAGES and ASSIST WITH THE ALIGNMENT OF THE CHAKRAS. They may also be used for KUNDALINI ACTIVATION, making them amazing for ROOT CHAKRA work. These stones are EXCELLENT PROTECTION STONES, (SPECIFICALLY FOR PROTECTION FOR PHYSICAL DANGER), and are said to be particularly useful for protection for children.

The RECORD KEEPER MASTER CRYSTALS are recognized by the presence of etched tiny perfect triangles on one or more of the crystal’s faces. These etchings are the result of conscious programming by the ancient races that first inhabited the Earth and contain eons of wisdom and profound secrets of the universe. The Record Keepers have appeared because the soul of the human race is becoming ready to inherit the secrets of cosmic knowledge and consciousness. They will be attracted to the exact right person at the exact right time to facilitate the actualization of this person as a healing agent for humanity and the environment. The information provided by the Record Keeper enhances ones light, providing for a deeper access to personal wisdom and promotes a greater peace to be used in this world. They are here to incorporate higher knowledge, wisdom, peace and love onto our planet at this critical time in our evolution.

DEVIC TEMPLE CRYSTALS are Master Crystals that embody an element of pure “magic” and if properly used can provide a gateway through which Angels, Devas and other beings of light can enter the physical plane. Inside the internal world of the crystal are rainbow inclusions of trapped air, water and gas that are called veils, foils and fairy frost. These formations attract the higher dimensional beings of light who remind us of our own supra-normal powers of consciousness and our natural abilities to connect with them. When the Divas are invited into our life through these crystals a magical presence prevails. The harmonic vibration of these quartz temple sites allows the veils between the worlds to be lifted and spiritual energies infiltrated into the surrounding environment.

The EMPATHIC WARRIOR CRYSTALS are recognized by damaged and/or missing portions of their terminations (points). They are often considered the unattractive, and unappreciated members of the Crystal Clan. These crystals are the experts at reminding us that we can have compassion for others without shredding ourselves in the process. They are also specialists at helping one to open one’s heart. Most of the Empathic Crystals develop beautiful rainbows within, reminding us that it is who we are on the inside that matters and it is possible to regenerate one’s own rainbows even if we have been badly treated, neglected and abused. They are the perfect symbol for the smaller self who is willing to sacrifice itself to the Higher Self.

MASTER STARBRARY CRYSTALS (STAR SEED): When working with this wonderful crystal, we noticed different markings on the shaft and face of the crystal. The markings distinguish it as a STARBRARY CRYSTAL. Think of it as a STAR LIBRARY which catalogs information. STARBRARY Crystals are said to be encoded with information from other Star Systems and waiting to be unlocked. Many people say if you are drawn to these crystals, you have already been "chosen" to work with their energy and you accept the tasks you are being called to perform. Said to have appeared on the planet for Light workers, Earth Keepers, Visionary Healers/Leaders, Energy workers and Bridge workers they are Energetic Assistance in times of planetary crisis. Starbraries are here to provide information necessary for HEALING THE EARTH ITSELF. They are being found in the nick of time. They are said to bring information from our Cosmic Elders which is extremely unique and potent. These Crystal Tools are here to help to give rise to a new level of consciousness, helping to fortify and heal the Earth both inside and out. Starbraries are here to assist with a bringing of Cosmic Knowledge to us. The Light workers who are "chosen" by these crystals are ready to accept this task and begin their search for these Cosmic Tools.

CASSIOPEIA STARBRARY CRYSTALS have lines and markings (symbols) down the shaft. Some have symbols similar to maps and legends. They sometimes also have Keys and Record Keepers. The Star Systems these come from Cassiopeia, (some from Pleiades contain more philosophical information, the basis for most of the Lemurian and Atlantean, and are the most sought after).

PLEIADES STARBRARIES are from the Pleiadian System, and are recognized by the geometric symbols along their sides - circles, squares, octagons, dodecagons, triangles (not to be confused with Record Keepers) and so on and they often have very pronounced keys. Pleiades, together with the Cassiopeia, have the strongest energetic links with the people of both Atlantis and Lemuria) and Leo which has more linear symbols along the side.

ORION STARBRARIES have deep ridges and furrows, which create very definite glyphs on the faces of the crystal, rather than along the sides or shaft. This is the only Starbrary which bears markings on the face. This wondrous crystal is connected with the people of the Orion system. Of all the Starbraries, it must have a ‘companion crystal’. This ‘companion’ may be a crystal of any type (not necessarily Quartz) and is more often than not, quite an unremarkable stone. The companion crystals sit in wait for a Starbrary to come into their energy field, which activates their abilities. The information contained within an Orion Starbrary is of such detail as to require a companion crystal to assist in first accessing the data, assimilating it into a form that is something than can be understood. This must be done before it sharing this information with other LIGHT WORKERS to assist them in their journeys for which they were chosen. The sharing of information is essential. The ORION STARBRARIES, it is said, are of the utmost importance and spiritual value to the future awakening of many more spiritual teachers, leaders, and healers to assist Non Natives in our ultimate task to heal our Grandmother earth. In order to accomplish that great task, it will take all peoples working together to for this common goal. This is the Starbraries’ MISSION and why these encoded crystals are found at this time in our evolution.

LEO STARBRARIES are said to be encoded crystal from the people of the Leo star system. It is a more linear pattern but does share some similarities with the first two – from Cassiopeia and Pleiades. The information contained within this type is more factual information than philosophical or spiritual. These are said to provide dates, major noted events, names and other more detailed information, i.e., weather anomalies and dates of such in order to assist Light Workers with information in preparation of those events.

This is the ultimate time to follow the calling to be a Light Worker, Bridge Worker and Earth Keeper. It is a privilege and honor to be called as a Guardian, facilitator, or care taker of these miraculous crystals as well. Working together, they are working their way around our planet to be with the guardians who will use them in the future. The Starbraries are thought to contain a way to create a direct communication with our elders from these far off galaxies. What a wondrous thing that these incredible crystals have been dormant just waiting for us to evolve in time to unlock their information, secrets and codes. With their monumental knowledge the Starbraries patiently await for us to discover and begin our work with them. In time, we will lay aside the fear, greed, and anger and begin to receive the answers many on the spiritual path have been long searching for. If you have discovered and been drawn to these amazing crystals, feel honored that you have been chosen to work with it and respect that task and share its secrets you unlock with others as their time is coming in which they will be known and we can expect the Starbraries will experience a simultaneous ‘awakening’, and create a huge grid of celestial light which will embrace our entire Grandmother Earth to assist in her healing.

Contact us for special configurations you are looking for as we have many dfferent configurations available, i.e., Abundance, Double Terminated, Key, Soul Mate, Record Keeper, Receivers, Cathedral, Trans-Channeling Dow, Manifestation, Window, Twin Flame, Soul Mate, Tantric Twin, Master Crystal Clusters and many more. Most are water clear and were charged at special vortexes and went through lunar and solar charging/cleansing ceremonies. (read about these in our shop profile).

I gladly accept returns and exchanges

Ship items back to me within: 14 days of delivery

But please contact me if you have any problems with your order.

The following items can't be returned or exchanged

Because of the nature of these items, unless they arrive damaged or defective, I can't accept returns for:

0 items in your cart